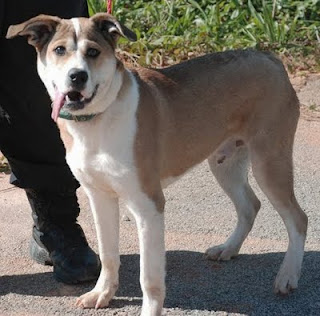 Meet Jackson. This sweet boy is about 7 months old and has lots of love to give. But Jackson found himself in a situation all-too-familiar in the animal shelter - he was signed over by his owners.
Jackson was adopted when he was 12 weeks old by a wonderful family. They loved him but as the months wore on he became "too much" to handle. He jumped on people, dragged humans behind him on a leash, ran around, banged into stuff, knocked the kids over, was mouthy, play-nips and didn't listen. Plus he began having problems getting along with their other dog. Finally the family reached the end of their rope and Jackson became one of over 300 pets turned into Walton Animal Control in October.
So where did Jackson go wrong? Being too much of a puppy.
Where did his family go wrong? Underestimating the challenges of a too-much puppy.
Let's face it - puppies are adorable. These sweet, furry cute little creatures are nearly impossible to resist. While older shelter animals work hard to get noticed, puppies bring attention to themselves without even trying. Who wouldn't want one of those cuties?
But here's the thing - dogs are born with great senses of smell, hearing, eyesight, and the ability to love unconditionally. That's it. Pet owners have to put the icing on the cake. Good manners, habits, training, rules, boundaries, and respect are all lessons that must be taught.
It can be time consuming. Just like children, all pups are different. One litter will have a wide assortment of doggy personalities: mellow, stubborn, laid-back, passive, independent, high-energy, submissive, meek or dominant. And like a Cracker Jack box, you won't know what's inside until you bring it home.
But back to Jackson - he's out of the shelter now and in a foster home. Jackson has the distinction of being WAG's first VIP - Very Incorrigible Pup. But not for long.
Because with a bit of schoolwork, Jackson will become an all-new VIP - Very Impressive Pup. This rowdy adolescent will again be the loving great family dog he's meant to be, albeit a milder version. So stop by in the weeks ahead to see how Jackson's doing. Our goal is to find him a new home by Christmas. We're excited, he's excited, and time will no doubt go by quickly.
Will Santa come through?