This is Knight - rescued from the Walton Co. shelter on March 22. His case is a great demonstration of the successful "it takes a village" approach to dog rescue. 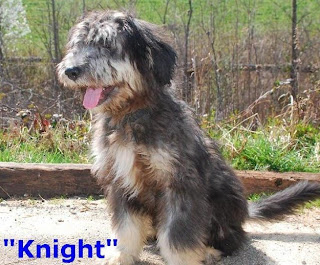 Knight, a 6 mos. old sheepdog mix, was brought into the shelter as a stray. His photo was posted on http://www.waltonpets.net/ website used by Walton Animal Control. Although potential adopters and local rescues check the site frequently, nothing happened for Knight. Local rescues were full.

It would be nice if all shelter animals had plenty of time to find new homes, but the shelter has a limited number of kennels. People drop off puppies, dogs, stray dogs come in, bite cases are quarantined, and things stay very full. So dogs need to leave very quickly. If they're not adopted or rescued, their last trip will be to the landfill. It's a harsh reality faced by staff and rescuers day after day, week after week, month after month.

So we hit the internet, posting his photo on nationwide rescue message boards, Facebook, and sending emails to everyone we knew in rescue, asking them to forward our request to all their contacts. In a matter of hours his photo was circulating all across the country.


Within 2 days a rescue from Doylestown PA replied and offered to take Knight. Since the Walton shelter can only release dogs to Georgia-licensed rescues, WAG stepped in and picked him up from the shelter one afternoon.


He came to my house (a hostel for traveling canines) and stayed a few days. He had a little bit of kennel cough and was treated with antibiotics. He was also neutered and just chilled out for awhile.


Meanwhile plans were being made to get him to PA. We tried a volunteer pilots organization, Pilots 'n Paws, that flies rescued pets to their new homes, but no one was available.

Finally, a paid rescue transport company was found. These folks stay very busy - you'd be surprised at the number of animals funneled from one location to another. They travel up the major interstates, stopping along the way to get animals to their new owners or rescue groups.

WAG met the transport driver on I-85 in Braselton and Knight climbed aboard the large van headed toward his new home! He's not there yet, but we think good things are ahead for Knight! We'll update you when he gets there.