Thank You to Donors

WAG is fortunate enough to have received support from the following donors during January/February, 2013: 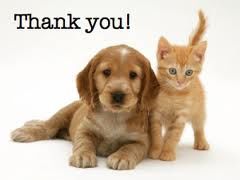