Schatzi, a bouncy Sharpei mix, was turned into the Walton County shelter in September, 2008. We thought she was cute—surely she would find a home quickly. We were wrong.

Schatzi spent several months post-rescue battling a stomach bug. When she finally recuperated and went to adoption events, nobody noticed. She sat quietly in the pens watching people pass by her. Nobody asked to see her or expressed any interest in this sweet girl.
Months went by and Schatzi lived alone in her kennel. Lots of rescued dogs came and went on to new homes, but not Schatzi. So we decided to take her to the Connecticut adoption event. Maybe she’d finally find her own someone special to love.
But Day One at the Connecticut adoption started the same way. Schatzi wagged her tail hopefully as people passed her cage, but no one stopped. Same thing on Day Two. Our hearts ached for this loving dog.

Then on Day Three it happened. A young boy spotted Schatzi and put his fingers through the pen. She gave a tentative lick. “She looks like Scooby-Doo,” he squealed. His parents weren’t impressed and tried to interest him in other dogs. But four-year old Dylan knew.
As soon as Schatzi came out of the pen to visit with Dylan, he threw his arms around her. “This is MY dog,” he said proudly to anyone who’d listen. As the happy dog snuggled next to him, the bond was immediate and obvious—even to his parents. A life lesson in love was beginning.
And finally, after ten long months, Schatzi was going HOME. 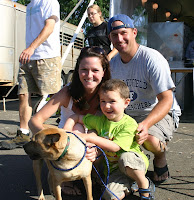 Check back - we'll be posting stories soon - once my paws recover from the long journey home.

Buddy
Posted by Buddy at 7:31 AM No comments:

Gotta say this - a lot of people have put in tons of work, particularly Paradox vets and staff who've seemingly been spaying and neutering in their sleep. Plus, gathering vaccination records, completing health certificates and loading Petfinder with info on all the dogs has been a logistical challenge and a pain-in-the rump. But you can't get around the benefit of 125 dogs finding new homes. So we'd gladly do it again.

There's still plenty to do. We're doing a mock-load on Monday, working out how the crates would best fit in the trailers. Gotta iron on the kinks out before adding excitable dogs into the mix. Still more paperwork left to do, a few more surgeries remaining, and plenty of dogs to wash and spruce up.

Whew. I'm tired and it's only Sunday!

Buddy
Posted by Buddy at 1:03 PM No comments: